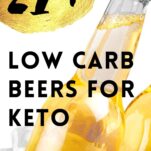 Looking for low carb beer? We checked the carb and calorie count of ales, pilsners, lagers, IPAs and more so you won’t have to. Take a look at the top beers with 2-5 grams of carbohydrate per serving.

Are any beers keto friendly?

There are no carbs in alcohol products that are pure like tequila and whiskey. Light beer and wine, on the other hand, can be low in carbs.

For keto diets, choose a light beer that’s around 3g of net carbs as it fits within your macro goals. Light brews typically have less than half the quantity of carbs found in regular brews. Some may have as little as 2g of carbs per serving size.

Note: Beer contains gluten, which may cause inflammation and digestive troubles that make it more difficult to achieve your goal of losing weight. Moderation is the key!

Pro tip: it’s ideal to pair your keto friendly beer with protein-rich recipes. This will slow down stomach emptying and reduce alcohol absorption. You may also use low carb beer in keto recipes, like beer cheese pretzels.

Miller High Life, Coors, Budweiser, and Yuengling are some of the most well-known American lagers.

Hops and floral, citrus, or fruity qualities dominate the flavor profile of India Pale Ales (IPAs), which include a wide range of beer varieties. Depending on the kind of hops used, the resulting product might be bitter or have a high alcohol content.

Pale Ales tend to be more hoppy than IPAs yet have a lower percentage of alcohol.

A lager is a kind of beer that hails from the Czech Republic. In comparison to Czech pilsners, German pilsners have a light yellow hue and a crisp taste.

Stouts are a kind of dark beer, and their taste is influenced by where they are brewed. In Ireland and England, sweet stouts are recognized for their mild bitterness.

What beer has the lowest carbs and calories?

Here’s a handy chart with the lowest carb and calories for a variety of beer types.

Do any beers not have carbs?

Alcohol products that are pure, like tequila and whiskey, generally contain 0 carbs. Light beer and wine, on the other hand, may be low in carbs. Therefore, due to the processes used to make beer, hoppy drinks containing no carbs can not be manufactured.