Keto doesn’t mean you have to give up bananas. This keto banana cream pudding recipe includes one thinly sliced banana in the entire pudding.

I’m always eating this pudding or my keto chia pudding for make ahead snacks. At 10 g. carbs, that’s still enough to keep your low-carb status if you only have a slice- or 5 g. for half a slice (strict keto).

How do I make it banana pudding low carb?

How do I make keto vanilla wafers?

Maple syrup gives your cookies a scrumptious sweet taste! Even my two-year old loved these cookies, and he’s quite the picky eater.

After mixing together your wafer ingredients, place them at least an inch apart on a non-stick baking sheet.

After about 17 minutes, remove from the oven and allow time to cool on a drying rack.

Can I have instant pudding on keto?

Yes, in moderation. Just don’t overdo it. If you’re doing lazy keto, or just craving a low-carb treat, this recipe is for you.

The one addition to the instant pudding mix that really livens up this recipe is the softened cream cheese.

Make sure your cream cheese is ready to mix in with the other ingredients.

I soften mine for 30 seconds in the microwave before mixing it in with the almond milk and half and half.

If you’re on a strict keto diet and don’t want to use instant pudding, make this instead:

How do I make keto whipped topping?

This is the easiest part of the recipe.

First, blend heavy whipping cream, powdered erythritol, and vanilla extract. Use your electric mixer to mix on low-medium until you notice “soft peaks” form at the end of your mixer when lifted (see photo for soft peaks).

Make this recipe into a low carb banana pie by adding all the cookies and banana slices to the bottom layer of a round pie dish. Next, add the pudding layer.

Finally, add the whipped topping or a meringue topping. 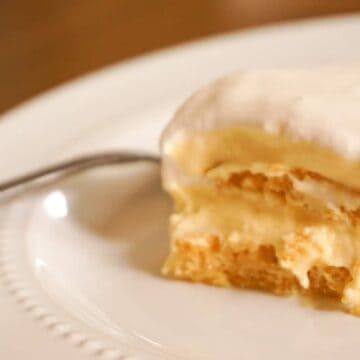 This recipe was inspired by an old-fashioned favorite from All Recipes.