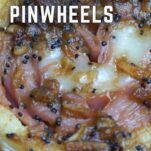 These Ham and Swiss Pinwheels are absolutely scrumptious….and keto friendly

I had these delicious party rolls by Averie Cooks at a friend’s party and I loved them. I decided to make them keto-style with a lower carb count.

What is fathead dough?

Fathead dough is popular in the low-carb community as a delicious alternative to the high carb count of breads and pizza doughs.

How to make hot ham and cheese party rolls

Fathead dough is easy to make, but many dislike the coconut taste.

To prevent this, I added a bit of onion powder to my dough and it made a world of difference. The onion powder pairs great with the onion bits in the buttery topping for this ham and cheese keto party roll recipe.

How do I make ham & Swiss pinwheels?

When you take the hot ham and cheese dough out of the oven, it should still be a bit workable and not completely cooked through.

Because of its malleability, you can roll it around the ham and swiss easily. You’ll want to cut the roll directly down the middle, to preserve the “roll” shape. Next, continue cutting each half of your hot ham and cheese party roll directly down it’s middle until you get 7-8 pinwheels.

Finally, use a brush to layer on the buttery dijon mixture and bake another 5-10 minutes until crust is golden and the cheese is melted to perfection.

Can I use other meats for hot ham and cheese?

Of course, try some of these other options: 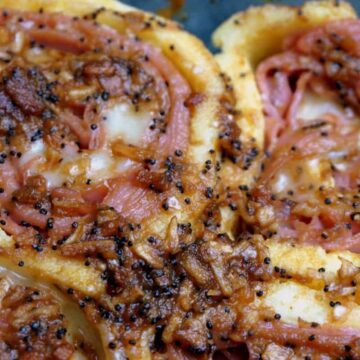