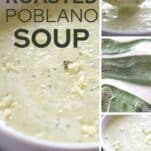 This cheesy keto roasted poblano cheddar soup is so filling and hearty. Try this tasty recipe for a flavorful and amazing low carb soup. Made with white cheddar, it looks as gorgeous as it tastes!

How do I make roasted poblano peppers?

To roast/char your poblano peppers,

How do I make keto/low carb roasted poblano cheese soup?

To make this rich and creamy vegetarian soup, I first place the poblano slices into a blender with one cup of half-and-half.

Next, you’ll blend until ingredients are incorporated.

Then, add all ingredients to your pot of cream cheese butter, white cheddar, and almond milk.

Consistently stir the soup, making sure nothing sticks.

Poblano peppers are not spicy, however, they are very flavorful.

Poblanos are like a more interesting bell pepper, yet not hot enough to be a jalapeño.

What’s the difference between white cheddar and yellow cheddar cheese?

The paler, white cheeses contain more natural fats and are actually good for you.

Typically, yellow cheddar will have additional ingredients for coloring.

Can I freeze poblano cheddar soup?

I do not recommend freezing this soup, as it is best consumed fresh.

How long will this soup keep in the fridge?

Poblano cheese soup will keep in the refrigerator for 2 to 3 days.

Simply reheat and add extra cheese if you wish.

What can I add to cheese and poblano pepper soup recipe?

What can I substitute for poblano peppers?

Instead of poblano peppers, you can use any of the following similar varieties:

Want to know more about roasting peppers? Check out How to Roast a Poblano Pepper from Chili Pepper Madness.

What can I make with leftover roasted poblano cheddar soup?

Since this soup is so thick and creamy, often like to serve mine as a taco topping or cheesy topping or dipping sauce with casseroles, low-carb chips, or cauliflower rice.

What can I substitute for the dairy in roasted poblano cheddar soup?

No cream cheese or looking for lower fat? Use a low calorie or low fat sour cream instead.

No half and half? Add more almond milk instead.

If too thick, add more almond milk to taste. To reduce carbs even more, use only almond milk and no half/half. 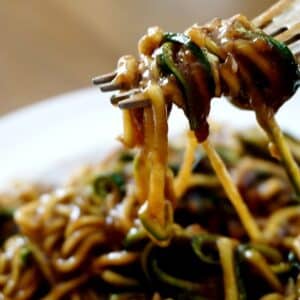 Search for a Recipe