Southern Keto Shrimp and “Grits” inspired by the Carolinas. Delicious shrimp, bacon, and peppers taste amazing over flavorful cheesy-garlic cauliflower grits. This is an easy, creole take on the traditional shrimp and grits.

Can I have shrimp and grits on the keto diet?

Unfortunately, no. Grits typically have a whopping 31 g. carbs per cup! If you’re on the keto diet, that’s more than you’ll have in a typical day. However, this recipe is very keto friendly and just as scrumptious as the original.

How do I make keto grits?

First, the grits are high-carb. That’s a no-no on the keto diet.

Because of this, we need to substitute them for a low-carb veggie instead.

Cauliflower is a nice alternative to rice and grain products if you’re on a low carb diet.

How do I make Southern style shrimp and grits?

Think New Orleans, creole, and fried. A lot of southern-style shrimp and grits call for Andouille sausage, and if you’re a big fan, add them into the shrimp portion of the recipe. For this recipe, I subbed the sausage and instead used bacon. Either or both are fine, depending on your preference 🙂

Can I make keto “grits” without cauliflower?

Not a fan of cauliflower? Substitute the cauliflower in this recipe for spaghetti squash, shirataki noodles, or finely chopped zucchini squash.

How do I make keto shrimp and grits?

Easy. Flavors in the shrimp portion of the recipe fuse with bacon. To begin, fry the bacon, remove and chop. Next, add in the shrimp, pepper, and seasonings to simmer.

For the cauliflower “grits” portion, begin by softening your cauliflower rice. While strapped for time, use the pre-riced bags of cauliflower from the produce section of the grocery store.

After softening, add your riced cauliflower to a food processor if the desired consistency is that of traditional grits. To finish the “grits”, add them to saucepan and cook with other ingredients, until incorporated.

Finally, you’ll serve the flavorful shrimp portion over the cauliflower grits and enjoy! 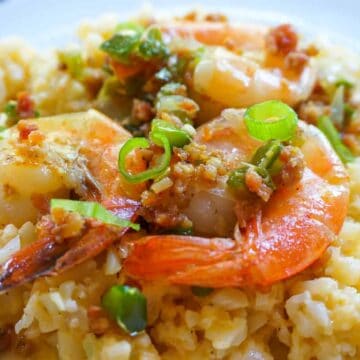 If you like Southern Keto Shrimp and “Grits”, you’ll love:

Finally, this recipe is inspired by the Old Charleston Style Shrimp and Grits recipe from All Recipes.

Shrimp and grits are my high carb go to but I am actually impressed with this recipe. Will be making this again.

I live in Charlotte and it's hard to beat the shrimp and grits at my favorite restaurant. Thanks for helping me curb my cravings for grits!