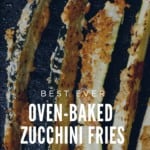 These crisp zucchini "fries" are a crisp, healthy side or perfect as a snack!

Zucchini is a great low-carb substitute for french fries

One of the hardest things to give up on my low-carb journey was potatoes. I grew up with fried potatoes, indulged on the frequent order of french fries, and loved a loaded baked potato. It's still my favorite vegetable, but I know they are loaded with carbs. These crispy baked zucchini fries do it for me.

Zucchini is much healthier and a great potato alternative!

How many carbs are in zucchini?

How do I make crispy zucchini fries?

The first time I tried to make zucchini fries, they turned out so-so. I've been making them for years now, and the secret is getting them good and dry before their egg wash and dipping.

Prior to dipping them in the cheese mixture, make sure to pat the zucchini dry with a paper towel to prevent sogginess. You'll want to serve these immediately after removing from the oven, as to preserve their crisp.

What cheese do I use for baked zucchini fries?

I went with a combo of Pecorino Romano cheese and Parmesan cheese here, but feel free to experiment according to your favorite sharp cheese. It adds a punch of flavor to the whole mix and tastes super yummy.

Be sure to keep an eye out for your spice/cheese mix, as the dipped zucchini tends to take up a bunch. If that's the case, you'll be replenishing your blend of spices before they're all dredged. Keep the cheeses and spices near by just in case. 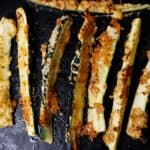 This recipe was inspired by a Parmesan-Crusted Chicken recipe from AllRecipes.com.

Hi, I'm Amber and I'm so happy you're here. I began eating low-carb when my son turned one. Since then, I've been sharing fast and yummy meals inspired by my roots in Southeastern Kentucky. about me! 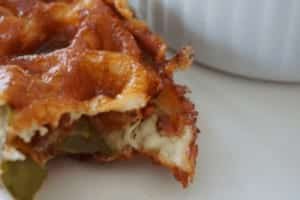 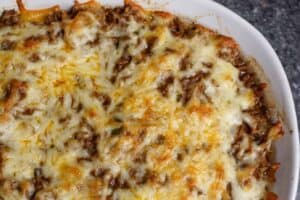